Many trees in our area of eastern LI have been defoliated by this year’s brood of Gypsy Moth and Eastern Tent caterpillars. Oaks are their favorite, but many ornamental fruit trees are now also bare. This is the second year in what is typically a 2-3 year infestation, followed by a rapid drop in population. A roughly 10-year cycle of major infestation is common in this area of NY/New England.

Despite their almost total defoliation, most mature deciduous trees survive these three-year attacks (not so the conifers in the rare years they are infested).  Indeed the oaks typically grow a new set of leaves in July after the May-June defoliation! So we are now witnessing a strange combination of pines and fully leafed maples interspersed with bare oaks, some sporting new leaves. Summer, Fall and a Second Spring all at one time! 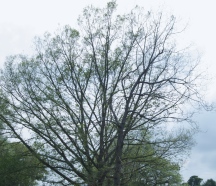